http://www.astridsembroidery.com/Custom_Embroidered_Call_Sign_Hats.html
Posted by Steve at 5:43 AM No comments:

This week-end Sept 19-20 Lots of activity

The Texas QSO Party is SCHEDULED ANNUALLY ON THE LAST FULL WEEKEND (SATURDAY AND SUNDAY) IN SEPTEMBER. Operating times for the 2009 contest will be from 1400Z on SATURDAY, September 26 to 0200Z on SUNDAY. September 27 and from 1400Z to 2000Z on SUNDAY, September 27. Stations may work the entire contest period. All logs must be submitted no later than October 31, 2009.
Posted by Steve at 6:29 AM No comments: 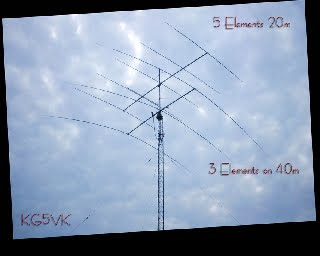 I am getting the station and antenna farm ready
for the ARRL Sweepstakes Contest, for years I have hosted
several ops here at my qth for a multi-op effort in this fun contest

I know of several ops that will be here are you one of them ???

Steve
Posted by Steve at 9:16 AM No comments:

Just finished the new 4 square
the last part was to run the coax from the phasing box to the shack that measures dumped power
It was the most rewarding part as the good news is the system has at least 91 % efficiency
of transmit power out to the vertical
iow less than 9 % is dumped power back to the dummy load
because of inefficient coupling of the phased verticals !

Steve
Posted by Steve at 4:28 PM No comments:

Webinar Schedule -- September/October:: "I am pleased to announce the Webinar schedule for September/October.
Things kick off next Wednesday (9/9) with KR2Q's 'When GIANTS First Walked
the Bands - The Early Days of Multi-Multi contesting.' Doug's presentation includes
timeless photos and a nostalgic look back at the early days of multi-multi
contesting. This is one of those presentations where you can put your feet
up and enjoy a great trip down memory lane!"
Posted by Steve at 5:58 AM No comments:

Manufacturer of Texas Bug Catcher Antenna to Cease Operations: "After October 31, 2009, GLA Systems -- the manufacturer of the Texas Bug Catcher antennas -- will cease taking orders for new antennas; according to their Web site, all orders received before that date will be filled. "Effective November 1, only orders for items that are in stock at the time will be accepted. Effective December 31, 2009, the toll free line, 1-800-588-2841, will be discontinued." No reason was given for the closure, but on GLA's Web site, owner Henry Allen, K5BUG, said "It has been a fun 30 years, but it is time to hang it up. I would like to thank everyone who has made this experience possible.""
Posted by Steve at 2:15 PM No comments: