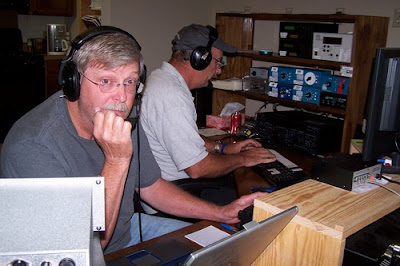 while I have not confirmed this.....


Simon Brown, HB9DRV, has sold the rights to his popular Ham Radio Deluxe software package to a group consisting of Mike Carper, WA9PIE, Randy Gawtry,K0CBH and Rick Ruhl, W4PC. All three principals have more than 25 years of experience with radio data communications. Rick Ruhl is the president of W4PC Software, Inc whose products include the PakRatt , PKTerm and Radio Operations Center software suites. Randy Gawtry is the president of Timewave Technology Inc whose products include the PK and DSP families of data controllers and other commercial data products. Mike Carper is an experienced Fortune 500 technology executive, educator and f eatured speaker
in the areas of wireless technologies and IT Service Management.

cheers!
steve
Posted by Steve at 3:30 AM No comments:

Many CW Skimmer or Skimmer Server users are probably aware of the Reverse Beacon Network. The RBN uses a small piece of software called the Aggregator to collect spots from CW Skimmers and Skimmer Servers all over the world and forward them to the RBN's database server.

Since the inception of the RBN, we have been using an effective bare-bones version of the Aggregator written by Felipe, PY1NB, founder of the RBN. Now, thanks to the programming skills of Dick, W3OA, we have a new, Windows Aggregator in a near-final beta form, available for download and use. In addition to being much easier to configure and use, the new Aggregator has some important new features.

* It adds the option of a master.dta check to Skimmer Server (like the Paranoid validation mode in CW Skimmer).

* It also allows users to send spots to the Aggregator without first filtering them to remove the non-CQ spots. The Aggregator then forwards only those spots the RBN requests. For now, that will be CQ spots for HF and all spots for 50 MHz and up. In the near future this will allow us to experiment with spotting the NCDXA HF beacons, and probably other tricks that have not been possible up till now.

* And finally, the new Aggregator permits RBN contributors to connect locally to it with their logging programs, either taking advantage of the new filtering capability or not, as they wish.

For the full story and a download link, see the Reverse Beacon Network blog at http://reversebeacon.blogspot.com/.