How we operated at the Lewisville JOTA 2019 event K2BSA/5
by
Dale Finley, kb5nft
---------------------
Our Lewisville Amateur Radio Club “Digital JOTA” area consisted of several different modes of operations. The primary area was designed to allow scouts to see, send and hear PSk/RTTY/CW modes with as much hands-on as possible. So, we set up 2 “Back to Back” laptops running Fldigi software (no radio transmissions with antennas and actual radios were used)  so that scouts with a minimum amount of training could hear and send & receive messages on screen.  This gave them the opportunity to sit next to each other so that one scout could train the other scout then “hand-off” to other scouts.

Stephanie, Ben Bowman’s mom joined in and Ben explained to her how to send and receive PSK messages… SNAP, the picture was taken.  Ben’s mom and I talked about how teenagers tend to not talk very much to their parents… Ben’s mom said, “Now I have a way to communicate with my son”.
Our Fldigi setup was designed with external speakers and USB dongle microphones on old laptops so that the scouts could hear as well as see their messages. All acoustically coupled. It is also possible to use an iPhone app, called PSKer on phones or tablets that can be used with minimum portable setup. Or PSKer and a laptop, etc.

An MFJ code oscillator was used to show them CW. We had a sample coding sheet that they could write their name and use the straight key to send their name and simple messages… And, it is possible to use this method with an App on an iPhone/Android and demonstrate different ham radio modes.  On the back of the sheet is a “How to get a ham license”, in 3 easy steps…

A second area was setup with Echolink connected to JOTA-365. It was very busy.  A third area with DStar was setup and Reflector 33A was so busy we couldn’t “break-in” so I drew a block diagram on a white board explaining how ham radios are linked over the internet.

In a forth area, Ferris Watson, WT5B had his Raspberry Pi setup and was explaining how the Pi could be used with ham radio… He was also decoding the Fldigi messages we were sending in the “Back to Back” setup area. One scout, Max, was interested in the Raspberry Pi,  because he could play Minecraft on the Pi.

Our display table explained “EOM” on how to Educate (teach scouts),  Operate a radio setup, and Mentor the scouts.  With licensed hams standing by as control operators and mentors, this method worked very well with our “Digital JOTA” setups.
My goal was to help fulfill as may Radio Scouting Merit Badge requirements as possible.  I believe we started these scouts on a “radio journey” and hopefully this “STEMulized” them not only to get the Radio Scouting Merit Badge but to assist them in getting a ham radio license.
de kb5nft 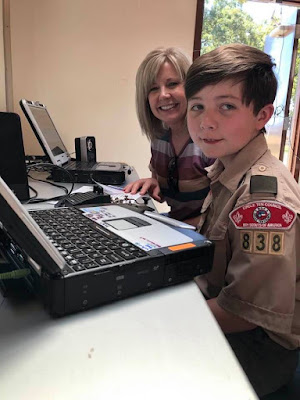 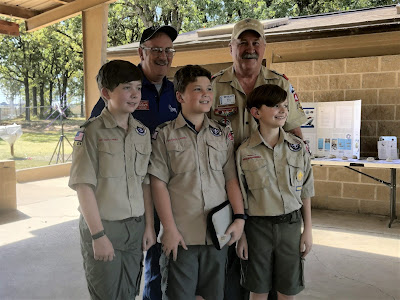