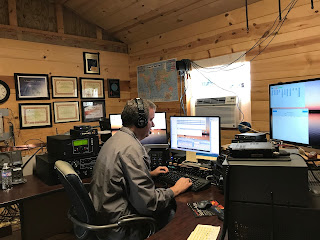 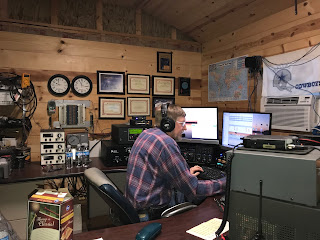 With the extraordinary help of  Scott & Victor
We managed a very respectful entry in this years running of the ARRL SS Phone Contest from my modest shack and even more modest and still maturing antenna farm.
With only three OPS, we had a lot of Butt In the chair time, however we managed to have some fun as well !
With a tad over 4 hours left before the end of the contest tonight, were nudging at over 900 Q's
we managed a sweep first thing Sunday morning on Twenty meters when VO1YY answered my CQ SS Call - What a Thrill !

Rain, Rain and yes More Rain and a few other topics for the post...

Have we had enough rain for the the last 30 days or what !
Hard to get anything done outside, it is so wet
Sure would be nice if we had a break and allowed the ground to get a little dry for a change
I guess it's better than a drought :)

Mean while on the health side of things........
Finally relief from my neck pain
Been to see the Nero Surgical guys again and got the second (other side of the Neck)
worked on and I have feeling great again !
It is so nice to now just have the occasional headache, versus the dehabilitating pain I was constantly having.

Mean while here is the current antenna Inventory

The 20m OWA M2 is still only at 26 feet above the ground,
which will probably work great for ARRL SS Next week-end
But sure looks way too close to the ground when you see it
Heck the boom is Sixty feet long, so it is barely a third as high as the boom is long !
Goal is to have it at 130 feet on the Tic Ring Rotor, eventually

The 40 m Four square is working great towards the North East
but else where it is only fair....
So I waded out in the water the other day and inspected it
Two of the feed points are broken, hogs chewed on them !!!
Yes we have wild Feral Hogs in these parts of Texas

I need to do some work on the 9el YCCC Low Band Receive array
lots of lightning last week and I think I lost several preamps at the base of the verticals
yupp more boards to build and replace !
This antenna system (YCCC Vert Array) requires a lot on maintenance but when she works she is worth it !

Decided I needed to stay close to home for several reasons and not trek to Louisiana for the anual
Multiop get together for ARRL SS Phone, I hope the team does great at W5WZ's QTH this year

Since I am home for ARRL SS Phone, I decided we need to see if a couple of the local guys want to come play....

Never would have thought it had been that long, but I looked it up
on the http://3830scores.com/ website

I am looking forward to getting to know the guys that are coming over to play
Hope we are able to post a respectable score, Top ten would be nice
but mainly want the ops to have fun and look fwd to coming back again

That's it for now!
Still raining

Cheers!
Steve
KG5VK
Posted by Steve at 4:41 AM No comments: